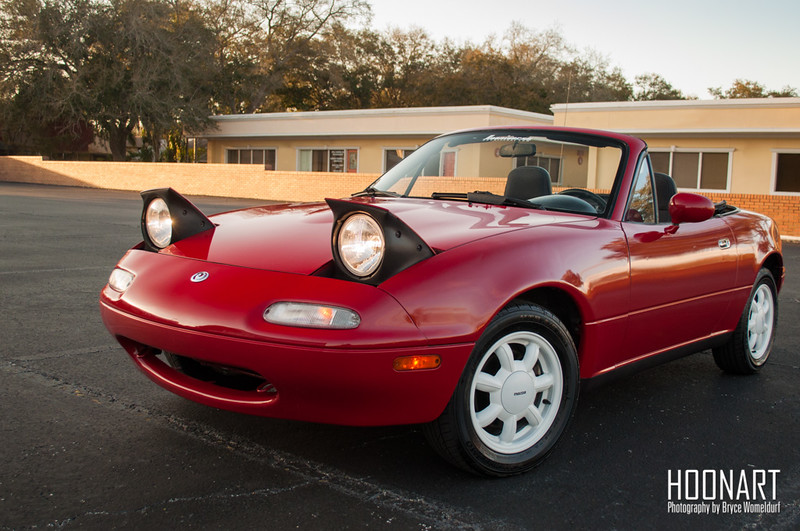 Re-published from Hooniverse, text and photography by Bryce Womeldurf

There have been many ups and downs with this project and it’s great to say that we’re starting the year off back on an upswing. It took some work to get here but take a look after the jump you’ll see how far we’ve come.

When we last left off (on Hooniverse) at Thanksgiving, I had successfully changed the leaking cam seals and as far as I knew had successfully retimed the engine. Just as I was getting things back together, a typo in the service manual that I was using caused a small bolt to snap, a bolt that helps to hold on the crank dampener pulley. This little bolt caused so much trouble. Miatas are a very small and offer very little room to work with under the hood for certain things. To make a long story short, I didn’t want to open the cooling system, because it seemed more safe to only take one thing apart at a time, to avoid labor and parts stacking up and causing further delays. If there had been room, I would have just used an extractor bit on the broken bolt and pulled it out, but the radiator and fans were right there without enough room to get a drill in place. So the car sat some more while I tried to come up with a good solution for this, and to take a couple of weeks to cool off from being so close to running only be pulled back down by a broken bolt. It’s the stuff that Shakespearean tragedies were written about, or so it felt.

Not to get too technical, but in the earlier Miatas, from ’90 and early ’91 the engines had what is called a short nosed crank. This short nosed crank, or SNC is very fragile. If a crank bolt is not put back in to the specified torque, on those cars, it can get loose and cause crank damage, basically requiring an all new engine or at least being glued back together with red Loctite. This was part of why I avoided the earlier cars when I was buying this ’95. The ’95 has a more robust big nosed crank, but with how much I’d read about crank bolt problems, this was something I’d wanted to avoid disturbing. Eventually, I ran across a friendly machinist who offered to help remove the broken bolt from the pulley boss if I could bring it to him. This was encouraging and gave me a plan B in case things didn’t pan out, so the only thing I would have to worry about was getting that crank bolt out. I got over my fears, ordered a new crank bolt and the replacement pulley bolts and got to work. 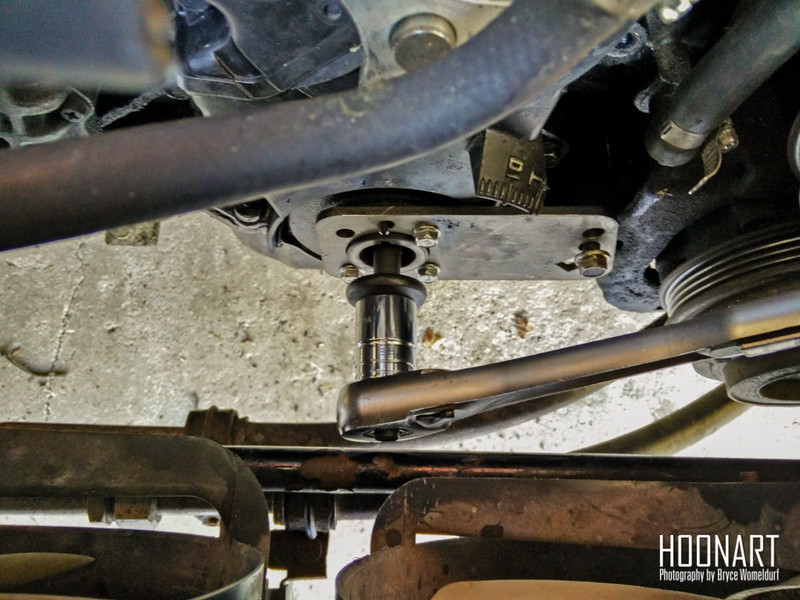 This was another place where things were delayed. In theory, you could put a wrench on the big crank bolt, brace it against the car, blip the starter and it would be released… or possibly cracked and broken if it was in bad shape or Loctited into place. There was also the option of putting the car into 5th gear and using a cheater bar, but there was too much slack in the driveline to really get the torque down. So, finally I stumbled onto a crank holding tool from Rennenmetal that would bolt everything down to the AC compressor bolt and with the front sway bar swung out of the way, it worked like a charm.

Much of this work was first time for me, so things were scary and slow going. I made yet another trip to the parts store for a 4′ piece of pipe, a big hammer, and a corded drill, because forget you, cordless drill, you’re never charged when I need you! With the use of the pipe on the breaker bar, the big crank bolt finally started to move. A few minutes later, it was out and the pulley boss was freed with the use of a big rubber mallet. With the boss out of the way, I could see that the timing keyway was in perfect shape. 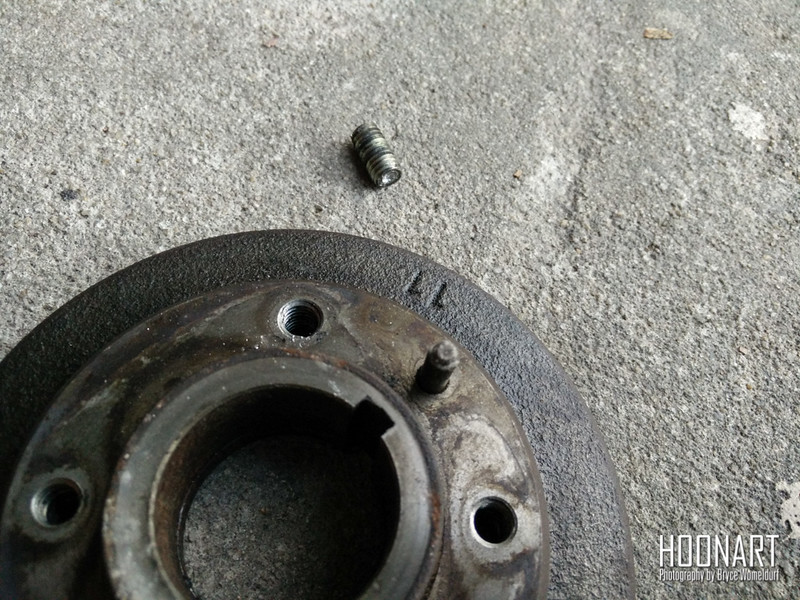 Now with the pulley boss out, I could try to extract the broken piece of bolt. Expecting Murphy’s Law to come back into effect, I continued on and was pleasantly surprised. I tapped the broken bolt piece with a center punch, and unfortunately not landed on center due to the uneven surface of the bolt. After drilling slowly to make a pilot hole, I decided to flip the piece over to avoid destroying the threads. Tapping and drilling another pilot hole in the back, it seemed that the piece could be pulled out the back instead. Things went even better than that, as you can see above. The drill actually pushed the broken piece out very easily!

From there, things came together much more quickly and easily. That evening, I torqued the new crank bolt into place, reinstalled the pulley boss and the pulley, the belts, and almost got both tightened. The following weekend, the fenders were reattached from cleaning, the belts were tightened, and the air intake system was put back together. Roadster fired up on the first try without a jump start! There was some clacking from the hydraulic lash adjusters filling back up with oil, but after a one hour shakedown, it was running as smoothly as ever and finally leak-free.

This would have been reported a couple of weeks ago, but I wanted to clean Roadster up and get some good pictures outside of the garage for a change. So, yesterday I washed, clay barred, and waxed Roadster, and finally added the Hooniverse sticker to the windshield. The paint still has its fine scratches and little imperfections, its character, but it really shines now. 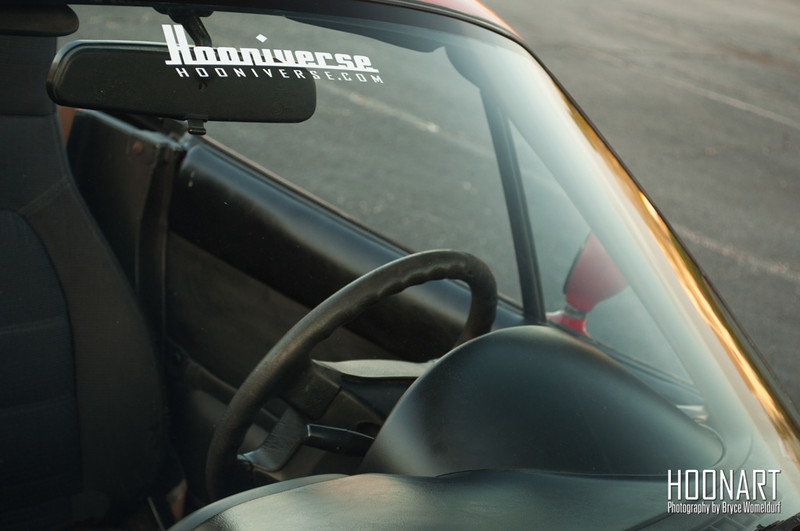 On Saturday, I had also restored the headlights on the daily driver Volkwagen “Thunderbunny” which gave me the idea to use rubbing compound on the gauge cluster window. The window for the gauges has been marred with some kind of harsh chemical since before I owned the car. With just a quick ten minutes of pulling the cluster out thanks to a how-to by Revlimiter I was then able to hold the gauge face with my feet, sitting on the ground, and gently polish away all of the imperfections with a polishing sponge on the new drill. Aside from some small cracks, it now looks as good as new. 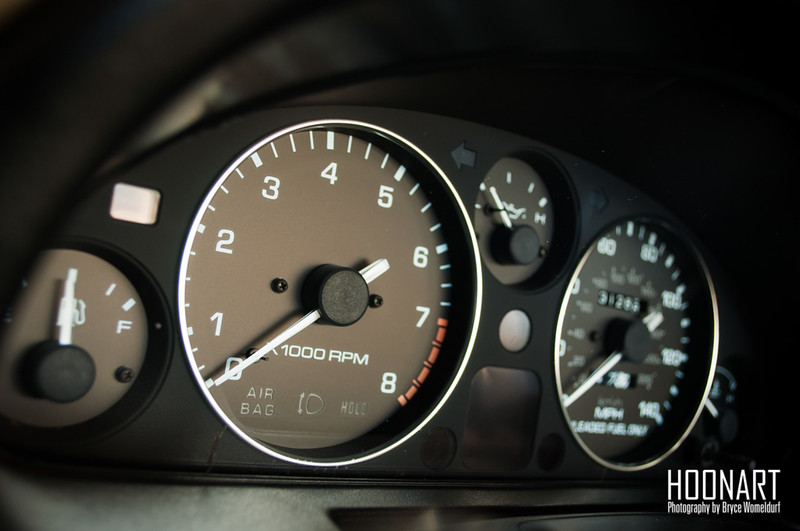 With the daylight fading fast, a nice clean parking lot was found where these photos were taken just as golden hour was beginning. 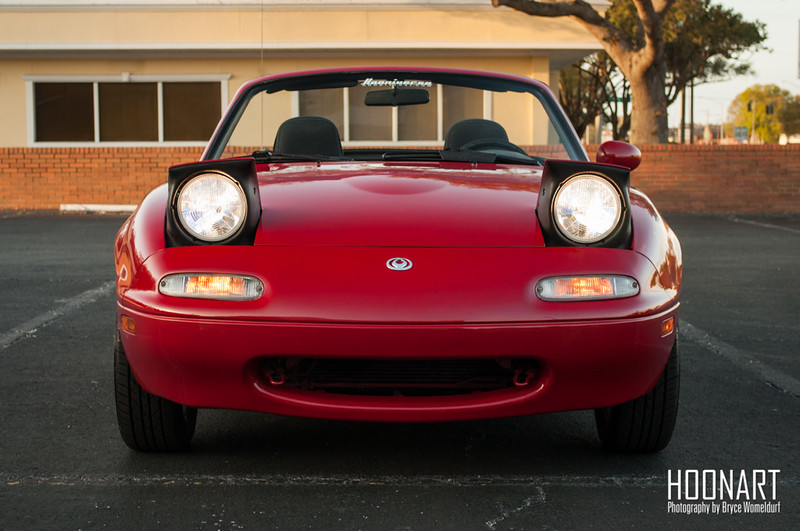 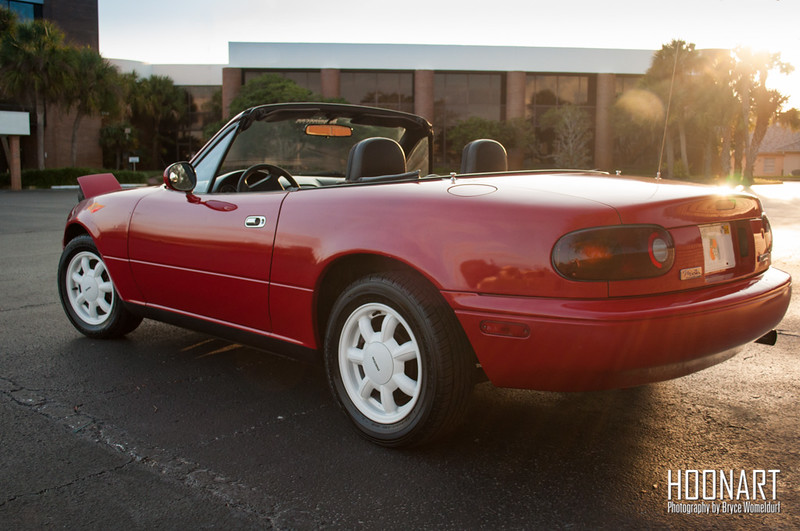 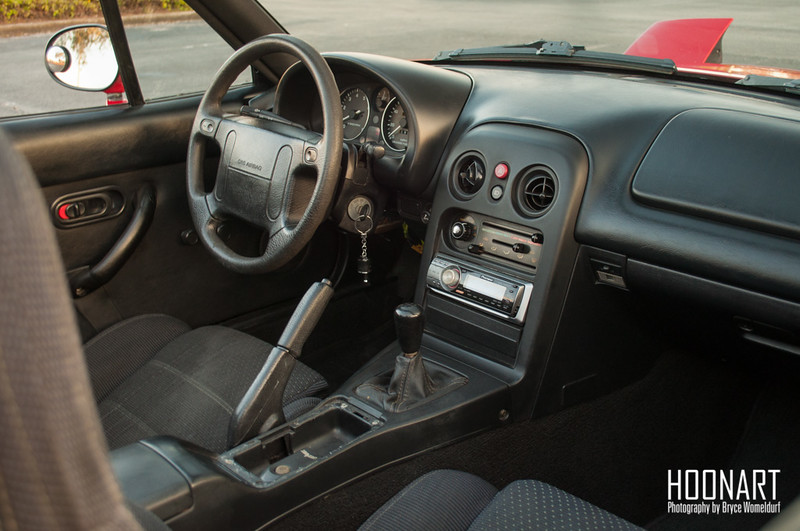 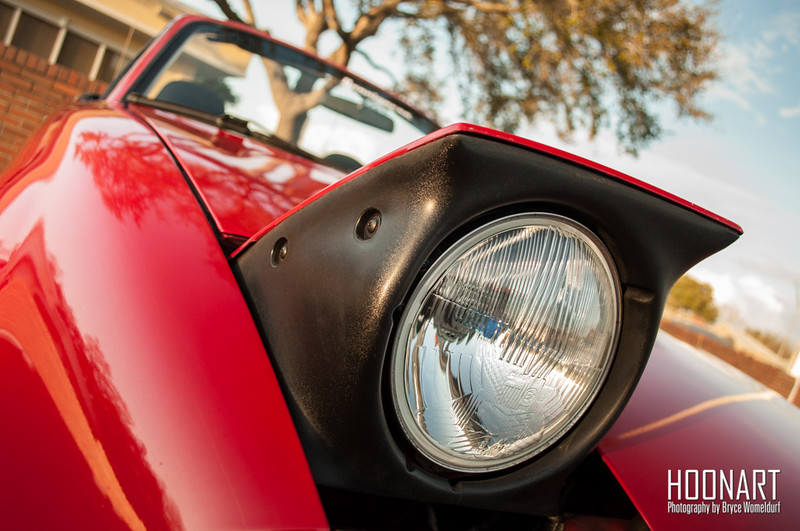 From here, it can finally be said that Roadster will be able to begin autocross this year. The new coolant hoses still sit in the trunk waiting to be installed, the engine lopes a little at idle likely due to an intake control valve that needs to be cleaned, and the car needs an undertray and a front air guide, but aside from those small things, this car is ready to race. Look for updates here as we likely start out as back markers and begin to learn how to drive the slow car fast.